The International Literary Prize of the city of Sassari takes place during the festival Ottobre in Poesia.

This event is held annually in the city of Sassari in the month of October.

The Festival Ottobre in Poesia get under way with its first edition in 2007, year when was announced and made known the announcement of The International Literary Prize of the city of Sassari, which awards were held during the second edition of the Festival. The prize take this name only from 2010; before it existed with the denomination Island of Verses.

During the days of the Festival, come one after the other meetings with authors, readings, performances, concerts and art installations; all events that, in last editions of the Festival, spread and widened, also involving nearby cities.

All the emotions and the artistic contributions of each edition of the prize, are collected in an anthology printed in limited edition. The festival was a great success of people since the early years and is currently among the most important literary and cultural events of the poetic landscape, also thanks to the importance of the guests who are invited to Sassari.

The 2012 edition start from Carbonia: "Waiting Ottobre in Poesia"[1] with an exhibition of works at international level directed by Shikanu, a recital and theatrical performance in schools; of a "After Festival" with a recital-shows at the Vecchio Mulino of Sassari, and meetings with schools of Alghero.[2]

The credit for the success of this initiative is due to:

The International Literary Prize of the city of Sassari is a very comprehensive literature contest, which provides for specific areas: 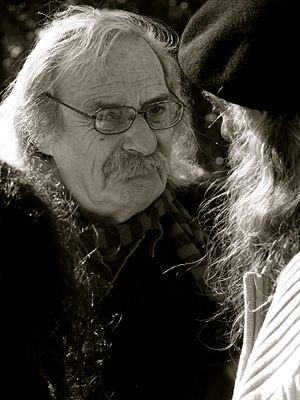 Jack Hirschman and Gabriel Impaglione at Ottobre in Poesia, October 2011

UNESCO and Presidency of Italian Republic for Ottobre in Poesia

The importance attained by the Festival in recent editions, has allowed the granting of major patronage:

In addition to previous patronage of the Autonomous Region of Sardinia, Town of Tissi and Sassari.

The places where the festival takes place are very different from each other and displaced in different cities:

Guests of the Festival

Particular attention is given to the meeting of the last day of the Festival at the Civic Theatre in Sassari where all guests and participants gather together in order to follow the performances (recitals, plays, etc.) of the most important guests of the Festival. In fact The Festival, over all its five editions, has been able to count on the participation of prominent figures as: it:Silvano Agosti, Beppe Costa,[3] it:Giovanna Mulas, Gabriel Impaglione, Fernando Arrabal,[4] Jack Hirschman, Paul Polansky, Robert Minhinnick, Alex Pausides, Tino Petilli, Hernan Loyola, Jan Fortune, Desmond Egan, it:Andrea Garbin, Fabio Barcellandi, Stefania Battistella, it:Adele Cambria, Alessandra Celletti, Dave Lordan, Antonella Meloni Corsini. In 2013, as special guest the poet and ex Israeli ambassador to Norway Naim Araidi[5]